Ahoy Fellow Fishes to another Wired Fish Podcast! In this episode, look back on the Skullgirls Indiegogo campaign and get hyped up for its success. Not only did Skullgirls meet many of its goals, it also meant that Mane6, the developers of the C&D’ed Fighting is Magic, get to use the Skullgirls engine for their new fighting game. After that, we delve into the small, niche, and indie gaming scene and wonder how these guys are doing so well compared to the AAA scene.

Timestamp of contents after the break.

END_OF_DOCUMENT_TOKEN_TO_BE_REPLACED

What I’d tell you? He was bound to get funded within the month, it was only a matter of time. While not as fast as Squigly, Big Band’s crowdfunding took a little over two weeks to reach its mark, $400,000 for the whole campaign. Big Band himself was funded a couple of days ago, but today both his stage and story has been fully funded, marking his campaign a full success. Like Squigly, Big Band will be free for the first three months after release and you’ll keep him after the time is up if you managed to get him.

END_OF_DOCUMENT_TOKEN_TO_BE_REPLACED 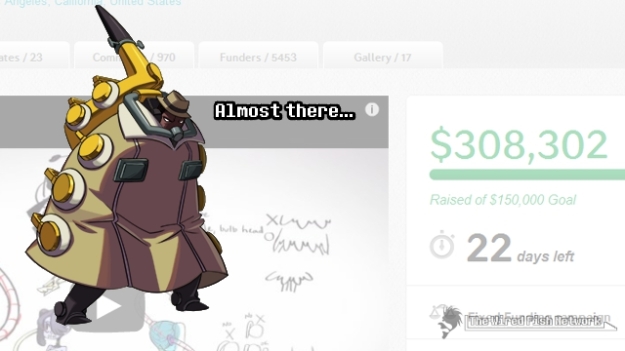 During my first two articles about Skullgirls‘ crowdfunding, the funds raised grew exceptionally fast. So fast that Squigly was funded within 24 hours. Big Band’s funding moving is a little bit slower than Squigly’s. But with just 22 days left and $308,302 raised as of this writing, there’s no question that Big Band will get the funding he needs by the end of the month (or even this week!). The stretch goal is $375,000 for Big Band’s creation, $400,000 for story and stage. And remember, he himself does not cost $375,000, but only $200,000 since 1) he’s a stretch goal and funding is combined with Squigly, and 2) he cost slightly more than Squigly to make because his creation wasn’t as far ahead as Squigly’s when the Indiegogo campaign started. It’s safe to say that Squigly was in development before publisher Autumn Games’ financial assets were frozen, halting funding for Squigly and forcing Lab Zero to find other means of funding.