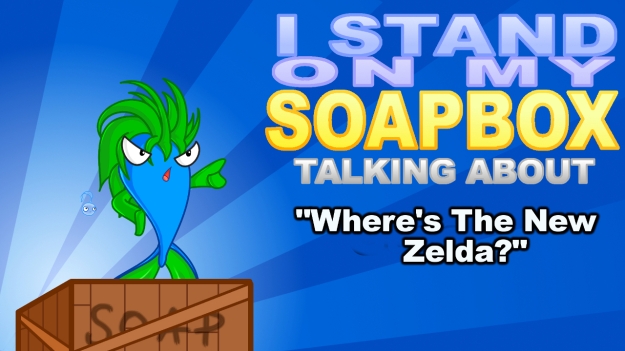 Of all the questions people asked about the Wii U and Nintendo this past E3, this is one question that outright irked me the most. You can see it everywhere you looked that had editors and gamers talking about what was missing at Nintendo’s E3. I too wondered some things. But a new Zelda was not in my mind, nor did it ever enter my train of though when I thought about what Nintendo was lacking. And yet, there are people that wanted a new Zelda game for the Wii U. For those people, I have this to say:

You just had one!

END_OF_DOCUMENT_TOKEN_TO_BE_REPLACED

Several weeks ago at New York Comic-Con, The crew tried their hands at Nintendo’s latest entry in the Zelda series, Skyward Sword. Suikoinfinity and our buddy Osjua tried their hand at the Bird Race and Boss Battle demo, while Steven “DPX” tried the Dungeon demo the following day (with commentary help from Allison B., who we met at the Con). Hit the jump for the Dungeon demo video. END_OF_DOCUMENT_TOKEN_TO_BE_REPLACED

Ahoy fellow fishes. Another episode has arrived! Despite battery issues, we have a full episode for you today. First up, the 3DS: What happened and what will its future be. Next, Gamescom and the games we’re looking out for. And finally, we talk about the games we’re playing now.

P.S.: in the intro, I wanted to say Tuesday but had Thursday on the mind. There is no day called Tursday. I meant to say Tuesday.

Oh this is getting hilarious. So, what’s the fanbase raising a big shit now? Well, it’s the Zelda fanbase. In all honesty, this fanbase raises a big shit over every Zelda game, the most infamous being The Wind Waker. But now, they’re going apeshit over Skyward Sword. A quick glance over at Kotaku, and you’ll see that editor Stephen Totilo had to practically defend himself from the vats of fan bile that was thrown his way when he demoed the game. For crying out loud, the game isn’t even out yet, and people are already writing off the game like they bought that shit last year. But I bet you’re thinking, “hey, crazy fish guy, you guys talked shit about Twilight Princess in that podcast you did.” Here’s the thing, it’s already out. We played it. We beat it. We have an opinion about it, a rational one at that. Here, Skyward Sword is still in development. While we addressed concerns about Skyward Sword, we also talked good things about the game too, unlike those fools that talked shit about it on Kotaku.