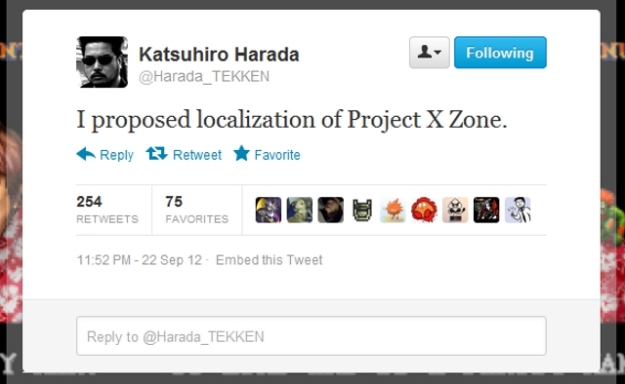 Ever since the news of Project X Zone‘s small chance of localization caught steam, the efforts of the PXZ Localization Community have picked up. According to an FB post, the leader of the Facebook Group, Anthony, took to Twitter to ask Katsuhiro Harada, the producer of the Tekken series, what it would take to convince Namco (the game’s devs) to bring the game Westward. His response was “I think they don’t localize that. That is unpopular out of Japan.” Not a good sign, but it almost echoed the statement from that Namco rep in the previous article. However ten minutes after that, Harada came back with this tweet, “I’ll ask project marketing team. ‘Let’s localize.'” Things were starting to look up. Finally several hours later, Harada did the deed and followed up with, “I proposed localization of Project X Zone.”

This is an unprecedented move in the efforts of the PXZ Localization Community. Harada is a well respected man in the videogame business, especially in the eyes of the Tekken community (and harbinger of shuttin’ fools down). Not sure how much involvement he has in the project, but his characters are in the game. Not that his characters in the game might matter, but his position in the company might have some kind of impact. Still, there is a chance that is proposal may not be considered. But the fact that it’s even being proposed in the first place by someone in the company might give Namco enough of a hint that people outside Japan want the game as well. It could be the beginning of something big. Fingers crossed guys!