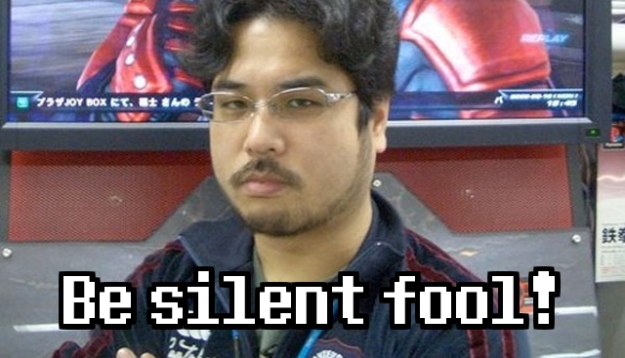 He mad yo! After hearing enough whining from Tekken fans about changes to the voices of the characters, Katsuhiro Harada took to Twitter to address these fans. It’s a long one, but the basic jist of his schooling is that he’s heard people bitch about how Namco’s changed the voice actors to much of the Tekken fighters as the installments go by. This is in part to the changes made to recording technology, equipment, and format being different from how it was 15 years ago. He uses Brian Fury and his maniacal laugh as an example of a voice they’ve reused over and over (at the request of fans who like his laugh). While his voice actor is a different one from back then, the voice file for the laughing is still the same one from Tekken 3 (Brian’s debut game). He points out that the laughing voice sounds different from his normal voice, which in turn make his voice inconsistent. But he keeps it because fans would be upset if they changed it.

He also mentions that voice actors sometimes cannot replicate the same voice over the years for many reasons, including voices changing, vocal health, retirement, or contracts/rights. He pleads with them, but sometimes they have to make due with the new blood. I say good on him that he’s stepping in to shut fans up. Some would wonder why I’m giving him the pass while others get the boot. Well, compared to them, Harada (and other veterans of the industry) have been in the business for a while and know their shit. As I always say: Be a pro before you can be a dick. You can read the tweet in its entirety on Kotaku.

Not too long after the reveal, Famitsu released character art and screenshots for Capcom/Namco/Sega collaboration Project X Zone. The game is a strategy RPG much like its predecessor, Namco X Capcom. That character roster might seem paltry now, but of Namco X Capcom is anything to go by, this is is going to grow by a huge margin. So far not exact date is set, but the trio’s aiming for a late 2012 release. Characters and art after the jump.

END_OF_DOCUMENT_TOKEN_TO_BE_REPLACED

I’m normally the center of my Capcom hate on this site. March was not a good month for Capcom at all, and boy howdy was it a PR nightmare for the company. But today, I’ll hold back my hatred for reasons you’ll see in a moment. Remember that teaser image that popped up last week that showed color bars depicted the colors of the characters (that Japanese gamers sorta solved)? Well, Capcom, Namco and Sega have revealed the game and it will be known as Project X Zone. Instead of a fighting game, it’s a strategy RPG. If your memory called back to Namco X Capcom right there, then you’ll be pleased to hear that this is the sequel. Not much else is known, but the trio did reveal which character would be in the game so far. And there’s one character I’m sure many Mega Man fans will be pleased to see in the roster. Check it out after the break.

END_OF_DOCUMENT_TOKEN_TO_BE_REPLACED 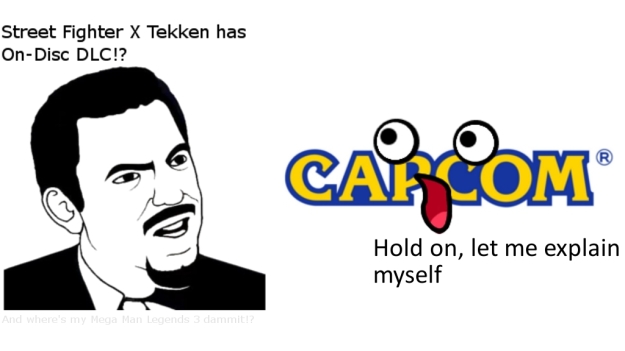 Ah this again. For once, just once, I want to say something good about Capcom after the Summer incident. But nope, we’ve got to talk about this, On-Disc DLC. It was one of the first articles I’ve ever posted for TWF when the blog was still on LiveJournal. It’s a hotly debated topic with one side calling foul over the practice, and the other coming up with a multitude of reasons for why it needs to be. On-Disc DLC popped up from time to time, with Bioshock 2‘s Sinclair Solutions DLC and the extra multiplayer modes that were present in Capcom’s own Resident Evil 5. Both moments put both companies in a negative light, and since then the practice was curb for most major DLC (from my understanding). But now it’s happened again, and boy it’s a doozy.

END_OF_DOCUMENT_TOKEN_TO_BE_REPLACED

Oh! It's a Super Saiyan Ghetto-Retard!

I want you to remember a time that you watched a really funny internet video. You saw it, and you said to yourself “Wow, this is hilarious! I have to show my friends!”. And so you posted it on your facebook, or showed it at a group hangout. Sure, it was stupid and devoid of any real meaning, but everyone laughed and had a good time, and it was quickly forgotten. If the mood strikes you, a long time later on you might still reference said video with a knowing wink and a smile, and a few people will chuckle and move on with their lives. And you will too.

This is kind of what Shootfighter Tekken is in a nutshell. A three episode OVA utterly devoid of any real intellectual or emotional depth, but still a ton of fun to watch while it lasts. Is it one of the greats, destined to stand with the great artworks of anime? No. But I deny you to not have a blast while watching this gaudy, ridiculous, and awesome little gem.

END_OF_DOCUMENT_TOKEN_TO_BE_REPLACED

The crew plays two matches in Street Fighter X Tekken. It seems to fight exactly as you’d expect from the SF4 engine, with extra features inspired by Tekken Tag Tournament (and a little bit of Darkstalkers too!). Do mind the blurriness and the sudden jump cuts. Video conversions kinda dropped the vid feed (like in the Rauman Origins vid) and I had to cut them out. Apologies.